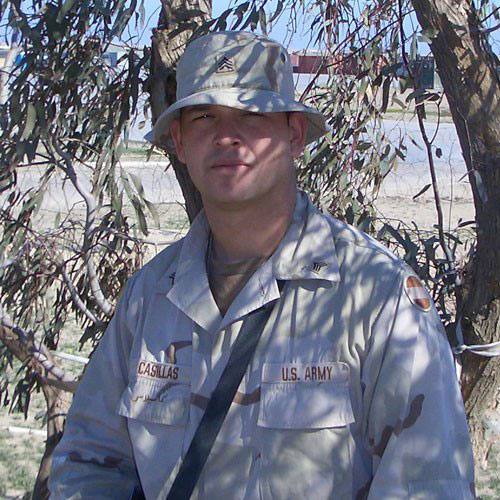 While home on leave in January 2001 Eric went out with family and friends. Meeting through a mutual acquaintance, we were inseparable from that evening on. He asked me to go on a date the very next day. Knowing he had a son and limited time home to spend with family I agreed as long as I wasn’t taking him away from his son. Our first date was roller skating and dinner. I fell in love, with both of them. Eric was the life of the party, a prankster, and everybody’s best friend. Nobody could be down or in a bad mood around Eric.

Soon Eric went back to Ft Benning and we stayed in touch through constant phone calls. I flew to Georgia as often as I could to visit him. During one visit in June 2001 Eric popped the question right in the Atlanta airport. We were in no hurry to make plans. We barely even knew each other. We just knew we were going to be together forever. Then 9/11 shocked our Nation. Fort Benning was locked down and Eric had no idea what was going to happen. I remember him telling me “I don’t know when or where, but I know we’re getting deployed. I’m not leaving unless you have my last name!”

In less than three weeks I secured an amazing Cinderella dress, a caterer, beautiful cakes, and fantastic rings. We were married in my church and enjoyed a great reception in my parents backyard. I moved out of Texas for the first time in my life. For most of our nearly 5 year marriage Eric was either training or deployed.

I remember missing him so much my soul was crushing while he was gone and often spent nights alone sobbing on the floor. Every chance I got to speak to Eric while deployed I always told him to be safe and careful but never had an extreme fear for his safety. I just knew he would come home to me. And he did. After he served a year in Korea we were so thankful he was transferred to Fort Hood, Texas so we’d be closer to our families and could visit them in Dallas/Fort Worth on weekends.

On the morning of April 13, 2006 I told Eric I loved him as I left for work. I never would have imagined it was the last time I’d ever get to do that. In the most unsuspecting, and certainly the most unexpected, way I returned from work to find the Lord had called Eric home due to an unknown heart condition. Two weeks later I realized I was given the most precious gift he could have ever given me. I might be spending our 5th anniversary alone, but I would never spend another milestone by myself. Racing into my world a month early, our son Landon was born in December 2006. Just like his Daddy, Landon is my world and my best friend. I know Eric smiles upon us every day and is so proud of our son.