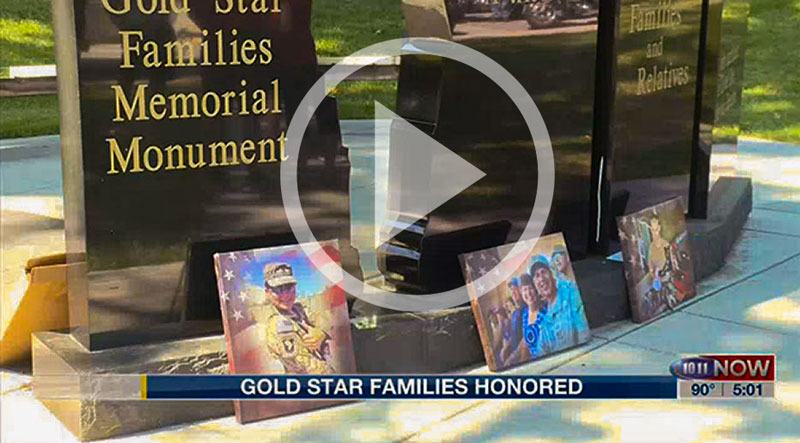 LINCOLN, Neb. (KOLN) -A nationwide effort to honor fallen military members made a stop in Lincoln on Monday. Dozens of motorcycle riders and the organization Tribute to Fallen Soldiers met with some area families of those who have died while in the military.

The riders paid tribute to Jessica Jackson, Trenton Scholl and Mathew Bauer, all Nebraska servicemembers who died while serving in the U.S. Military.

Their families said remembering their loved ones on Monday was a gift.

Among the Gold Star Families were Jim and Dianne. Their daughter, Army Sergeant Jessica Jackson, died in 2014 at the age of 21.

She was just a really good person,” said Jim. “She had a glow, she would just light up a room.”

Jessica’s parents were one of the three families recognized on Monday for the Tribute to Fallen Soldiers Memorial Torch Motorcycle Ride. Each family received a plaque, a picture of their loved one and a patch with their loved one’s name on it. The flame on the back of the vehicle stays ignited from Oregon until they reach Arlington, which will be in August. When they stop at night, someone stands watch to make sure it doesn’t go out.

The executive director of Tribute to Fallen Soldiers said every stop they make is emotional.

“We’ll say their names out loud and make sure they know that we will say their names, that we care about them, love them and are there for them,” said Warren Williamson, executive director at Tributes to Fallen Soldiers.

For Jim, life without his daughter has never been the same.

“It’s like a really long movie that has a sequel every year, new actors and new players, " Jim said. “It just never stops. It’s something that will last the rest of our lives.”

Every year the ride starts in Eugene, Oregon and ends at the Arlington National Cemetery near D.C., but the route in-between changes.

This year, Lincoln was one of the stops. Since the program started 13 years ago, they’ve honored 1,100 people nationwide and impacted their families.

“The number one thing they say to us, to me, is that their greatest fear is that someone will forget their child, their husband, their spouse. We are always there, even if not physically, we are always thinking about them,” Williamson said.

For families like Jessica’s, it’s a way to remember her.

Her dad said she lived her life one way--