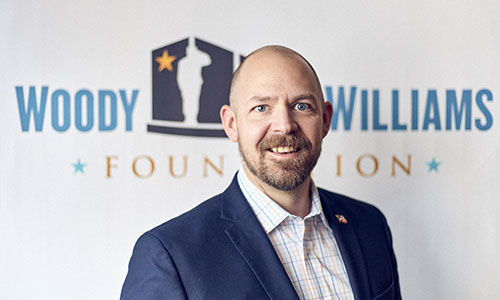 Chad is the President and Chief Executive Officer of the Woody Williams Foundation. He works hand-in-hand with fellow founders, the Board of Directors, and Advisors to develop, assess, and oversee implementation of the organization’s strategy and management.

Chad holds a B.S. in Interdisciplinary Social Science as well as a Masters of Business Communication with a specialization in Non-Proﬁt Administration from Spalding University. In addition to his involvement with the Foundation, Chad is also the Co-Founder of the Louisville Musician Service Coalition, a service organization aimed at utilizing the power of music and the talents of musicians to positively impact the community.

He comes from a multifaceted background in the equine and music industries. Chad has worked in various roles within top equine industry operations including farm management, training, and exhibiting. These efforts have resulted in multiple World Championships as well as playing key roles in world class breeding and racing operations. Within the administration sector of the equine industry Chad served as the Chairman of Young Trainers within United Professional Horsemen’s Association.

Within the music field, Chad is a successful musician, performer, songwriter, and producer garnering critical acclaim and industry awards as well as wide-spread public support.

He is an avid sports fan and outdoorsman.