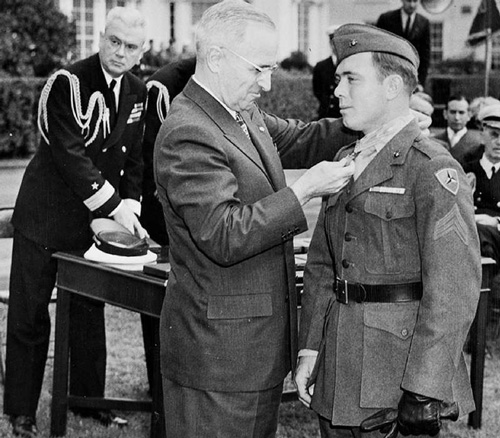 • Hershel “Woody” Williams was born on a dairy farm in 1923 in Quiet Dell, West Virginia. He enlisted in the United States Marine Corps and served in the Battle of Iwo Jima with the 21st Marines, 3d Marine Division. During the battle, Mr. Williams displayed “valiant devotion to duty” and service above self as he “enabled his company to reach its objective”. Mr. Williams’ actions, commitment to his fellow service members, and heroism were recognized on October 5, 1945, when he received the Congressional Medal of Honor from President Truman at the White House.

Mr. Williams’ devotion to duty, service members, veterans and their families began long before that battle and before he entered the Corps. As World War II began, Woody came into direct contact with families in his own community when he delivered Western Union telegrams informing the Gold Star families of the death of their loved one. Woody always said that those experiences gave him a “greater appreciation for life and an understanding of a difference in death in the normal world as expected in life, and those lost serving in the military for their country". He noted that “consideration and recognition of the families of those lost in military service was very inadequate.” This observation and his personal commitment to veterans and their families brought about the creation of the Woody Williams Foundation.

To date, Woody’s foundation is responsible for establishing 117 Gold Star Families Memorial Monuments across the United States with more than 66 additional monuments underway in 50 states and 1 U.S. Territory. The Foundation continues to grow its reach by being involved in multiple initiatives across the country.

On June 29, 2022, Chief Warrant Officer 4 Hershel Woody Williams, would go to his final duty station in heaven. He had devoted his life to serving others. Before he passed, he left us with clear orders to all be a part of the mission to never forget. He would want us all to remember his motto: “The Cause is Greater than I...”

Some facts about Woody:

Following the war, Woody worked for the Department of Veterans Affairs (VA) for 33 years as a Veterans Service Representative, allowing him to continue serving veterans and their families.

He served as the Commandant of the Veterans Nursing Home in Barboursville, WV for nearly 10 years, helping veterans who were often in their last years of life.

Still today, Woody serves on the Governor's Military Advisory Board in the State of West Virginia.

His actions have often been recognized by our military and its highest officers, recently the Secretary of the Navy named T-ESB 4 (Expeditionary Sea Base Ship 4), the USS Hershel "Woody" Williams mobile base sea vessel. She entered Navy service in early 2018.

In 2018, the Huntington VA Medical Center, near Woody’s home in West Virginia, was renamed in his honor. The Hershel “Woody” Williams VA Medical Center has been improving the health of the men and women who have so proudly served our nation since 1932.

In his hometown of Fairmont, WV, the 32 million dollar Hershel “Woody” Williams Armed Forces Reserve Center is the only National Guard facility in the country named after a Marine.

The VFW (Veterans of Foreign Wars) Hershel “Woody” Williams Post 7048 in Fairmont, West Virginia and the main bridge in Barboursville, West Virginia are named for him as well.

Woody has literally penned dozens of Resolutions to help veterans and other causes in West Virginia and throughout the United States.