Lcpl Aaron Boyles wanted to follow both his Grandparents and Dad footsteps and to join the Marines. Aaron went to boot camp and finished his basic training. He was stationed in 29 Palms California in June 2003. He was assigned to a Headquarters 7th Marines Regiment. He married Prabha on 4th of July, 2003 and moved on base housing in 29 Palms California and was deployed on February 5th, 2004 to Iraq. He was wounded a few months into his deployment on April 30th, 2004 and was offered a chance to return home to recover but he chose to stay with his fellow Marine brothers and received his first Purple Heart. His last call to his wife on September 23rd, 2004 he told her that his leave was canceled. He told his wife that she had to be strong and both our moms would be there for her, helping her to deliver our baby. Aaron gave the ultimate sacrifice as a result of enemy action in Al Anbar Province in Iraq on September 24, 2004. Aaron was given his second Purple Heart. 19 days later his wife delivered their beautiful baby boy named Brandon Aaron. 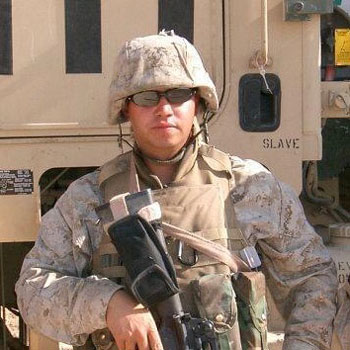