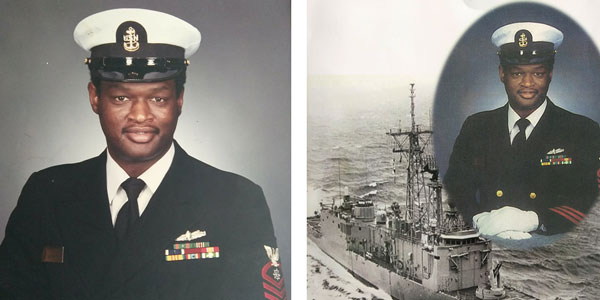 On May 17, 1987, Vernon was killed aboard the USS Stark (FFG- 31) with 36 other brave heroes when two Iraqi missiles struck the ship in the Persian Gulf during an attack.

QMCS Vernon T. Foster I was born in Tallahassee, Florida, on February 16, 1954. He graduated from Amos P. Godby High School with honors in 1970.

He attended Florida A&M University and later joined the United States Navy in 1972.

Vernon served aboard the USS Stark, USS Lexington, USS Engage, and USS Patterson as a navigator. He was a top Navy Recruiter in South Florida and worked with the VA organization and the community as a volunteer.

On April 1, 2016, Senior Chief Quarter Master Vernon T. Foster I was honored and inducted into The Godby School High Hall of Fame by The AGG. On May 25, 2016, Leon County Schools placed Vernon's name upon the Wall of Remembrance in Tallahassee among those who have paid the ultimate sacrifice for our nation. He was a loving husband, devoted father, mentor, and influenced many.

His legacy and dreams will live on for generations to come.