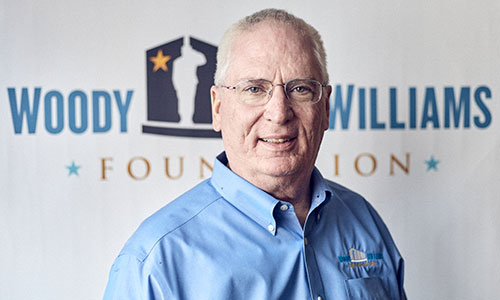 Patrick O’Leary was the Veterans Affairs manager for UPS. He had the responsibility of coordinating, synchronizing and promoting all the activity connected to the company’s veteran’s initiative. He is recently retired.

He was hired in October 1978, as a part-time employee while attending college in Louisville, Kentucky. In 1981, he was promoted into a full-time management position in the Industrial Engineering department. He has held various positions in both staff and operations. In 1986, he was assigned to the Human Resources department and has had a variety of assignments over the last years.

Patrick served in the United States Marine Corps from 1974 to 1978. He was trained as an avionics technician and was assigned to HMX-1, which is the squadron that supports “Marine One” the helicopter that transports the President of the United States. He also crossed trained and became a crew chief on both the VH-1N and VH-3D aircraft. During his four years he received two meritorious promotions, earned the Presidential Service Badge and the National Defense Service medal. He was honorably discharged as a Sergeant (E-5).

Patrick has two children. His daughter Colleen graduated from the University of Louisville and his son Connor graduated from Eastern Kentucky University. Connor was commissioned as a Second Lieutenant in the United States Marine Corps December 2014, and is currently stationed at NAS Pensacola, Florida.